Santa Marta, Colombia — Policymakers may not have the time to sift through scientific papers or 30 000 data samples on the ocean’s health. That’s why marine scientists using nuclear-derived techniques and communication experts from Latin America and the Caribbean teamed up earlier this month to repackage scientific findings for policymakers. The aim, with the support of the IAEA, was to raise awareness of threats to the ocean and help decision makers in the region take evidence-based policy action.

In the workshop, held in Santa Marta, Colombia, more than 20 marine scientists and communication experts worked side by side to create five easy-to-digest advocacy products that explain the role of nuclear science in monitoring the marine environment. Together they form REMARCO, a network in science and communication that connects 14 countries in the region.

It is in these kinds of meetings that we learn how to translate our technical language into something that is understood outside the world of science.

“Scientific reports are not always easy to digest and scientific papers are published in very specialized channels, which is why a lot of relevant results don’t make it to policy makers,” said Magali Zapata Cazier, programme management officer at the IAEA’s technical cooperation programme. “The aim of this workshop and of REMARCO is exactly that: to help scientists communicate their results outside the scientific sphere, and this way create the necessary awareness to influence decision taking.”

The network was established in 2016 to connect these countries in the face of shared challenges in their marine and coastal environments: marine pollution, ocean acidification, harmful algal blooms and microplastics. With the support of the IAEA’s technical cooperation programme, scientists from the network use nuclear-derived techniques to monitor these phenomena and come up with appropriate remediation or mitigation proposals. 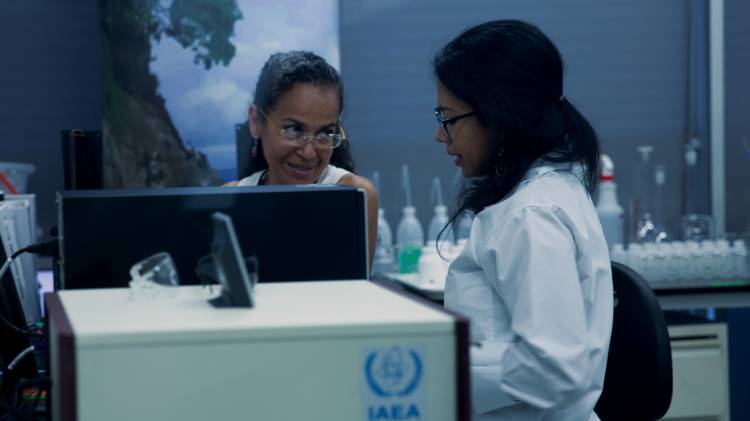 With equipment and techniques provided by the IAEA, technicians and scientists have so far collected almost 30 000 samples of water and marine organisms. Santa Marta, Colombia. (Photo: L. Gil/IAEA)

During the workshop, experts from Brazil, Chile, Colombia, Costa Rica, Cuba, El Salvador, Mexico, Nicaragua, Panama, Uruguay and Venezuela created four brochures, one for each of these themes, and a flyer on REMARCO. The idea is to offer this material to decision makers at various conferences and high-level meetings, such as the 22nd Meeting of the Forum of Ministers of the Environment of Latin America and the Caribbean, as well as to make the material available online.

“It has been very interesting to work with communicators, because something that seems obvious to us scientists might not be obvious to a general reader,” said Celeste Sánchez Noguera, marine researcher from the University of Costa Rica’s Center for Marine and Limnological Research (CIMAR).

In addition to the print material, experts have come up with a communication strategy for the medium and long term, a proposal for a video and a series of country profiles to raise awareness of what issues are affecting each country individually.

“Marine environments represent a renewable source of biodiversity that contributes to the economy,” said Francisco Arias, Director General of the Marine and Coastal Research Institute INVEMAR, where the workshop took place. “The shared knowledge generated by our scientists helps sustain this indispensable resource for Colombia and the other coastal countries that are also affected by these threats.”

More than 300 scientists and technicians overall have been trained on the use of nuclear-derived techniques to measure marine pollution, ocean acidification, harmful algal blooms and microplastics through the IAEA’s technical cooperation programme. With equipment and techniques provided by the IAEA, technicians and scientists who form REMARCO have so far collected almost 30 000 samples of water and marine organisms and have published numerous scientific papers on various threats to the ocean. 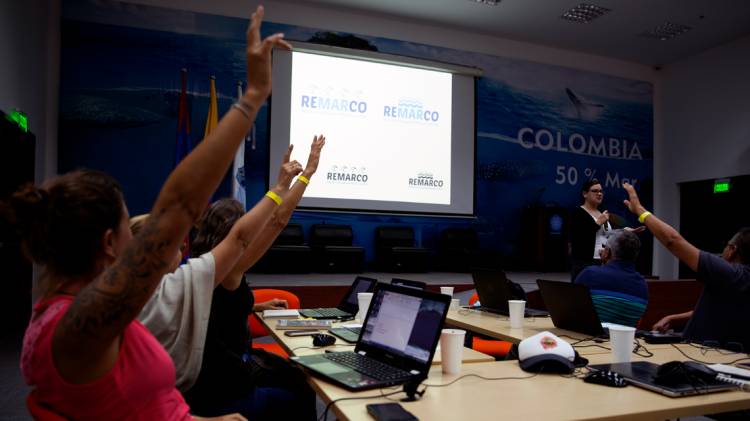 Marine scientists and communicators vote for the logo of REMARCO, a network in science and communication that connects 14 countries in the region. (Photo: L. Gil/IAEA)

These results will be used to tackle major ocean challenges, such as ocean acidification threatening organisms such as corals and molluscs. This acidification is an alteration of the chemical composition of seawater due to the accelerated increase of carbon dioxide, or CO2, in the atmosphere caused by human action.

Harmful algal blooms, or HABs, are natural phenomena generated by the growth of certain microalgae that produce a harmful or toxic effect whose frequency, in recent years, has globally increased. They affect ecosystems, the economy of coastal areas, the safety of fish resources and public health, leading to severe poisoning and even death.

The deterioration of water quality, the detrimental effects on living resources, the danger to human health, the reduction of natural attractions and the obstacles to economic activities are consequences of coastal and marine pollution. This pollution is the product of human activities that introduce substances — such as domestic and industrial wastewater — and energy — such as heat, lighting and noise — into the sea.

Microplastics, lastly, are one of the most worrisome, complex and difficult-to-handle pollutants. They are plastic particles of a size smaller than five millimeters that reach the oceans. They originate from the fragmentation or direct manufacture of materials for industrial and domestic use and may impact ecosystem functions

Scientists of REMARCO investigate these emerging phenomena using nuclear and conventional techniques and produce and exchange valuable knowledge aimed to contribute to developing public policies. These consist of mitigation and remediation actions that protect the ecosystems, as well as constant monitoring of the state of the environment.